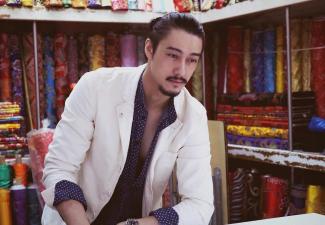 From a high-flying banker in Asia to a busker in Paris, James 楊永聰 can be dropped into any situation.

Trained in Tai Kwon Do, an avid surfer, a former go-kart racer with experience in downhill skiing and BMX cycling and in-line skating, James is something of an action hero. He's an experienced motorcyclist and has bulked up and slimmed down for roles as required. Yet he has also played romantic leads with emotion and tenderness. In his previous real-life lives he's been a kindergarten teacher and an executive in a multi-national financial services company, which along with his training in law gives him a rare gravitas.

James played the lead in one of Cathay Pacific's annual Christmas/New Year videos and the male lead in a mini-programme sponsored by Kate Tokyo, acting and singing in both and was one of the principal characters in two series of "Sparks" an internet series promoting DBS Bank. And in late 2022, Disney+ Hotstar added one of his earliest appearances to the streaming service. Go LaLa Go 2 is a lightweight RomCom in Mandarin where he's credited as Yang Yong Cong.

Like all actors, he's waiting for a big break but he's closer than most. James was in the final list for THAT Asian movie and for the Asian lead character in THAT franchise.

But, of course, there's the other big franchise: could there ever be a British Oriental James Bond? Just follow the next step, Miss Broccoli. For the first time, you could have the title theme by the main character. That'd be different.